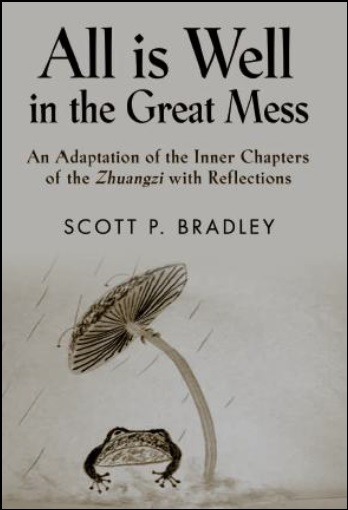 All things are in flux and traces are our attempt to stop their ceaseless transformation by naming them. In naming them we give them a specific, fixed identity. Even if I am not at this moment the same as I will be in the next or in the previous, it’s convenient to think and say so. (No doubt Heisenberg’s uncertainty principle [the position and velocity of a particle cannot both be accurately measured at the same time] and quantum physics would agree, but I won’t pretend to understand them well enough to say so.)

So traces are a means by which to bestow identity to things despite that aspect of them that defies all identity. Thus, if we are interested in exploring how we might transcend identity—our own especially—then the idea of traces becomes an important tool in that project. The realization of no-fixed-identity is, as I tirelessly (and perhaps tiresomely) assert, at the heart of Zhuangzi’s vision of obtaining freedom from all fear and peace-robbing entanglements. No-fixed-identity is the experience of both being and not-being oneself. This puts us back on two roads at once. I enjoy being “me” while not taking this “me” as something real and fixed—something to lose—that’s the scariest loss.

But beyond these two is a different level of experience. My unidentifiable me-ness is in some way identifiable with the unidentifiable Great Happening—the unimaginable Totality of all things. “I and the ten thousand things are one.”

That’s the theory, at least. But trace-full though it be, it is easily approximated. We are not, after all, talking about complete and unsurpassable enlightenment here. It’s just a thought experiment. It’s imaginative meditation. And it feels good.